Wanting a cheap family holiday – if there is such a thing these days – on the sunny island of Kos, my wife, two kids (six and twelve at the time) and I stayed at the Alice Springs Hotel and Apartments in Lambi.

I always feel you’ve got to take a balanced view when reading other holidaymakers’ comments on review sites; clearly, what one person likes or dislikes doesn’t mean everyone will feel the same – people have different expectations. However, if there is a constant theme running through the online reviews, then there must be some truth – good or bad – in what people are saying.

I decided to do some research on the Alice Springs (has around 11 apartments, four studios, 24 rooms but no lift) before I parted with my cash and couldn’t believe the number of people praising not only the complex of hotel, apartments and studios but the jovial hosts, too. In fact, it’s a place which receives regular repeat customers, so that tells you something. 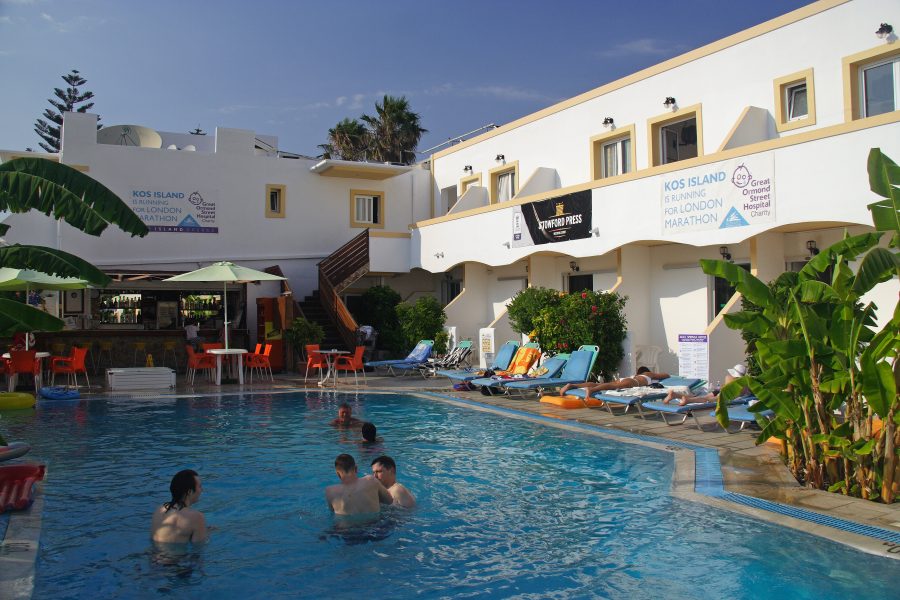 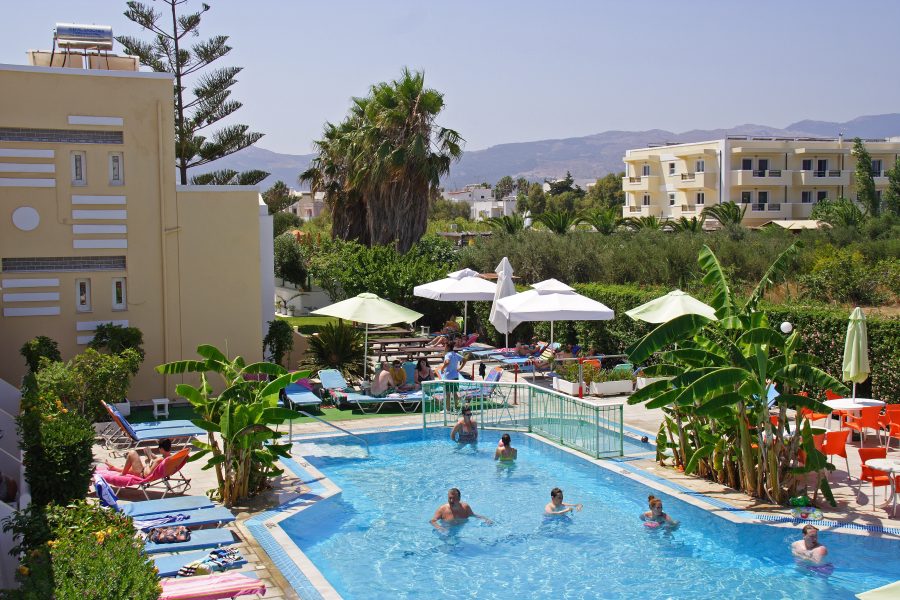 I’m pleased to say that our experience, in terms of the owners, was the same as the holidaymakers who’d shared their comments. Although Greek, George and Barbara spent a lot of time – and still do – in Australia, hence the name of the property. Barbara and their son, Elias, run much of the day-to-day business now while George divides his time between Kos and Down Under. We didn’t see much of George but his wife and son were genuinely friendly, helpful and knowledgeable.

The property is close to the beach, shops and within walking distance of the town centre and harbourside. One piece of advice, though: it seems bikes – and there are hundreds of them – have priority on the pavement and it was a real hassle trying to walk along dodging the cyclists when one’s progress was already hindered by cars obstructing the route. At night, be very careful, especially as many cyclists don’t use lights and travel too fast.

The Alice Springs has everything you’d expect, including a bar (you can order snacks and drinks), games area, decent amount of space for sunbeds and a pleasant pool, with a section, albeit tiny, separated off for young children. After a day out exploring, my kids loved returning to the apartment and rushing down to the pool – which never felt crowded.

Although we were expecting it, the apartment was very basic. One bugbear was having to pay for air-conditioning. Again, this was mentioned in the brochure but I don’t like added extras and, to be honest, found the cost rather steep (nine euros a night). We decided to see how we got on; once we’d acclimatised to the high temperatures, we were able to sleep well without the need of air-con.

Cooking equipment was rather sparse. I think most proprietors offering self-catering apartments think that you’ll eat out or, better still, at their establishment. But being a family of veggies, we find we can cook better, more wholesome meals than at restaurants where the menu contains predominantly meat and fish dishes. It’s usually the pots and pans which are lacking and this was, again, the case. Thankfully, we brought some utensils from home which saved the day.

We spent most days exploring the island. It’s worth hiring a car (there are companies just a stone’s throw away or just ask Elias or Barbara and they’ll arrange a vehicle). We found the roads quiet once we’d left Lambi behind. 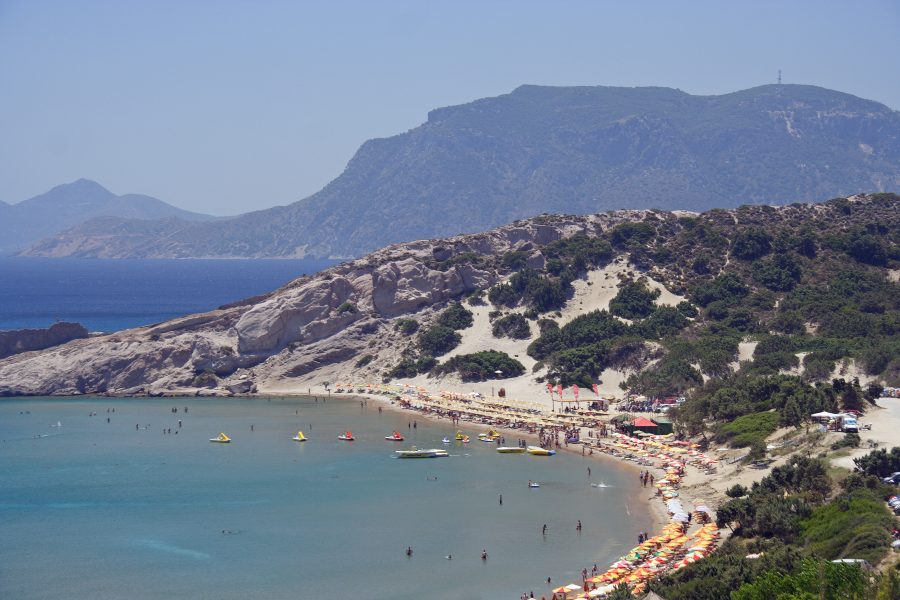 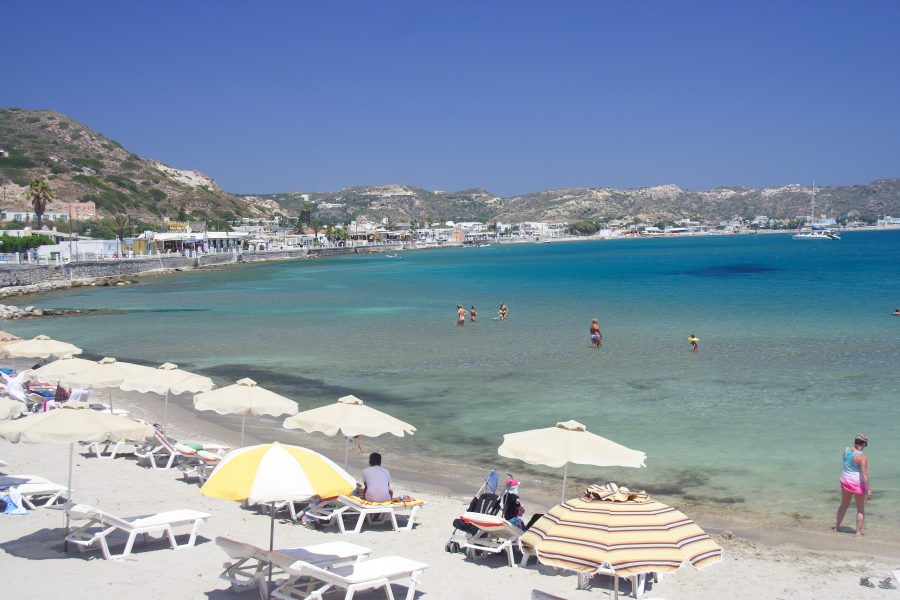 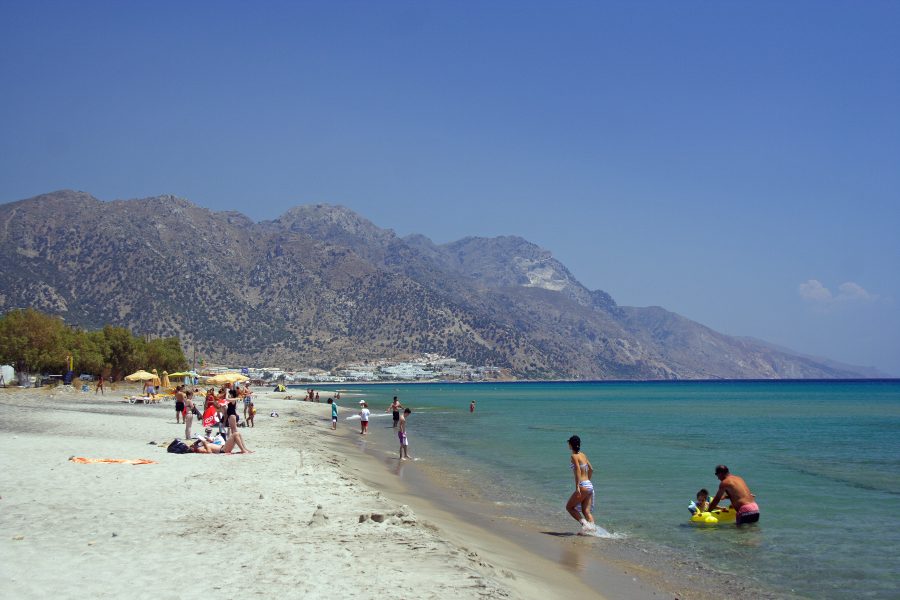 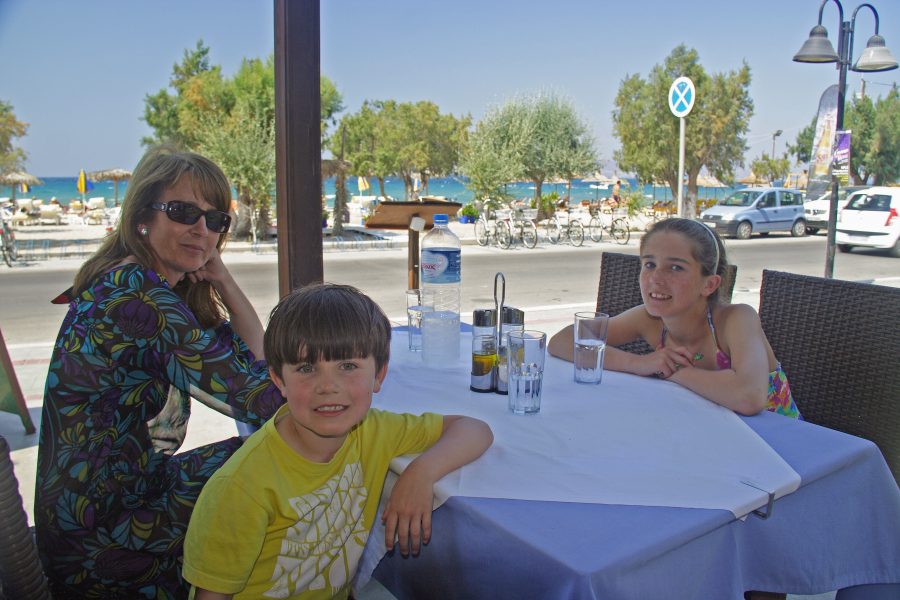 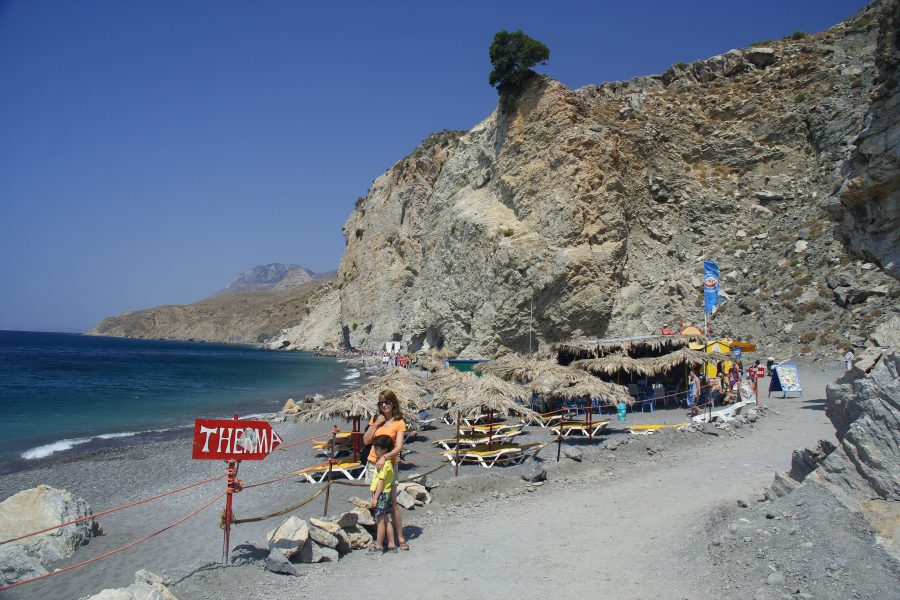 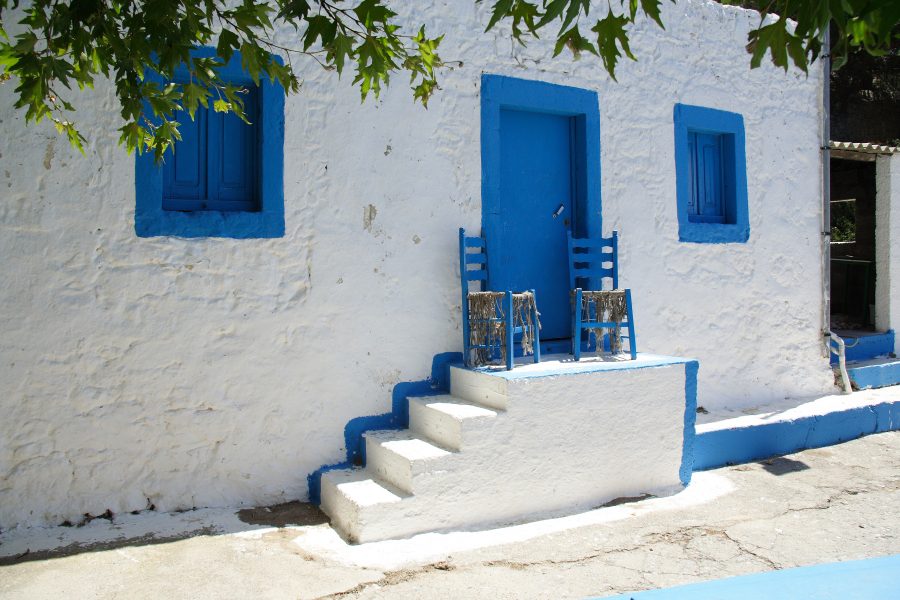 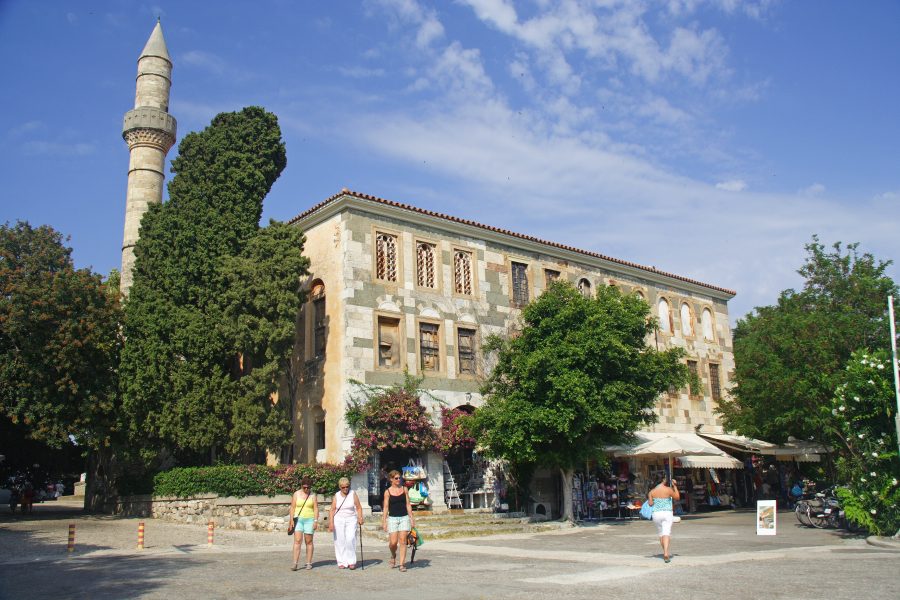 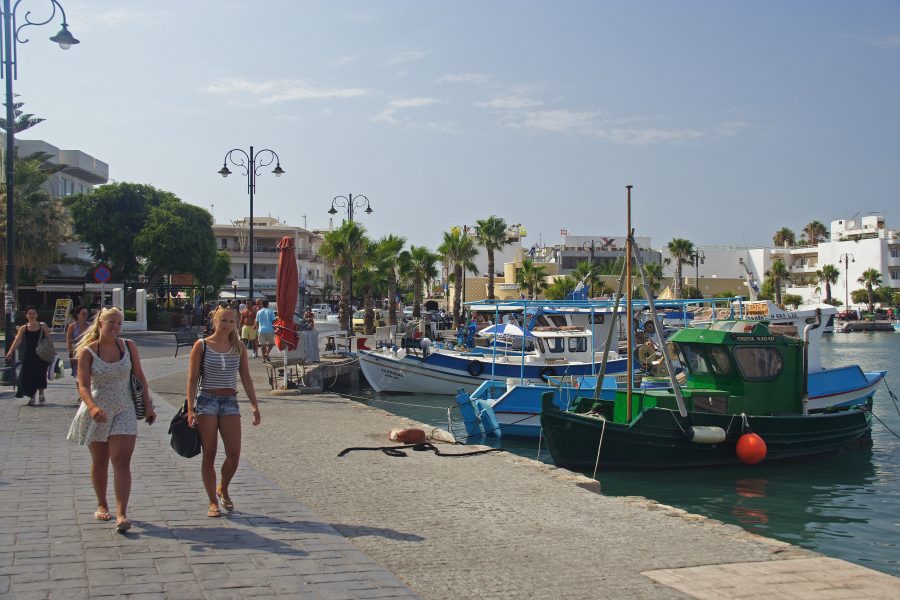 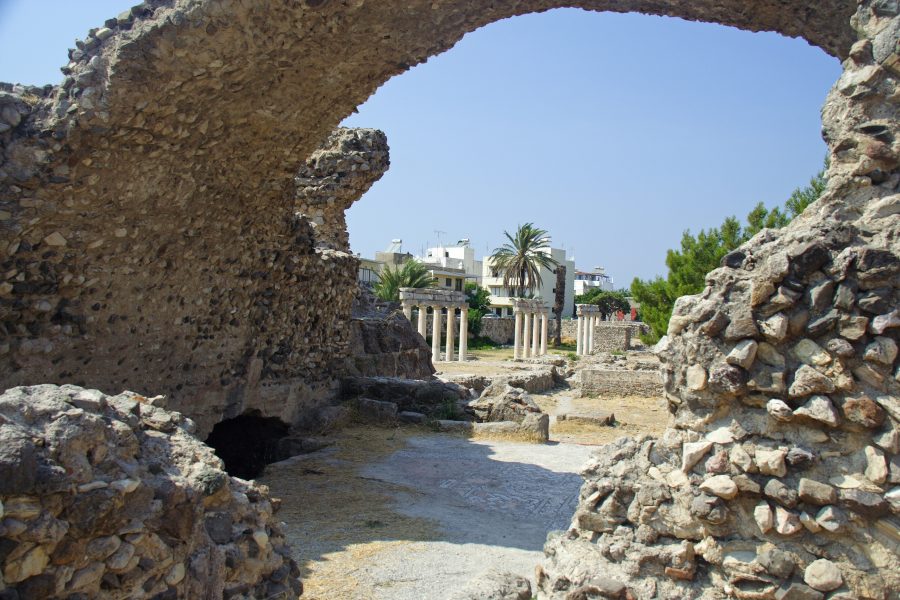 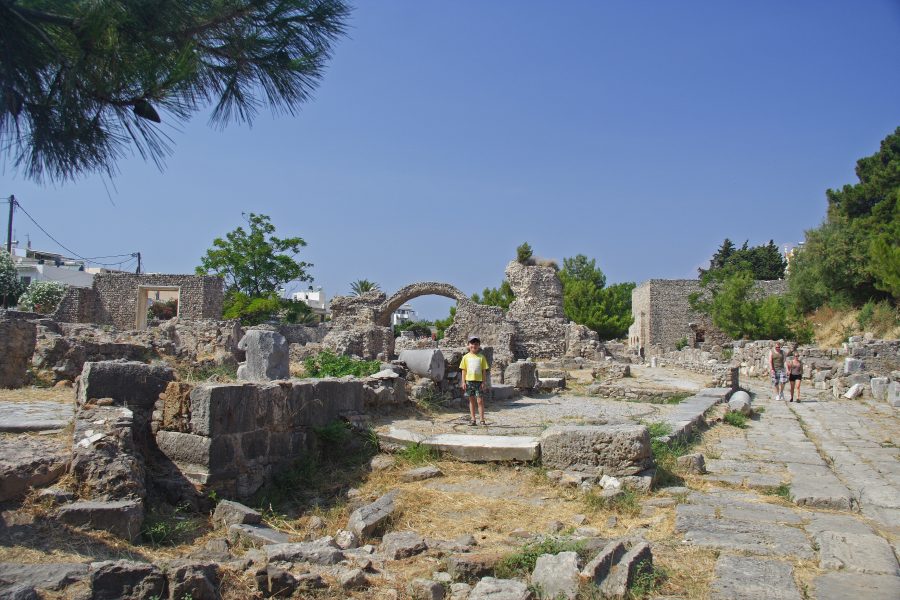 Many guide books regard Paradise Beach, on the southwest coast, as one of the best. Yes, it’s a lovely beach in terms of its locale but we’re not in to stretches of sand crowded by endless rows of sunbeds. We found some quiet, uncommercialised beaches – and where we spent much time swimming – close to our accommodation, on the coastline between Lambi and Tigaki. Our favourite spot was frequented by locals, always a good sign.

Other highlights included exploring Kos Town, with its Castle of St John, the Roman baths, the Ancient Agora and the cobbled streets of the Old Town, full of boutiques and pavement cafés. And take a trip – along with throngs of other tourists, unfortunately – to the mountain village of Zia where after looking around the souvenir shops and stalls you can watch the spectacular sunset. For us, it was the perfect way to finish off what had been an enjoyable holiday.